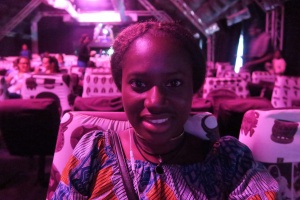 It has been about two years that we have been waiting for the release of Marvel’s Black Panther. However, ever since the announcement, the world has been impatiently waiting for its release. Teasers have been circling all over the internet and throughout the world. This includes funny memes, GIFs and hashtags such as #InWakanda. Of course, I was one of the many people that has been waiting a long time for the Black Panther release. In January, I contacted the cinema’s here in Dakar, asking if and when they would screen Black Panther. I was definitely happy to hear that they would premiere Black Panther on February 16th. Certainly, I was happier when I reserved myself a ticket for the original version (English spoken) of Black Panther for last Friday! In this post, I will tell you all about it. Keep on reading :).

For those who don’t know, Black Panther takes place in a fictional country named Wakanda. T’challa returns to Wakanda after the death of his father, to take his rightful place as king. Let me say that the world thinks Wakanda is a third-world country, a stereotypical depiction of today’s African continent. Yet, from the trailer we know it to be a technology advanced country. Throughout the film, we meet a powerful enemy that might mess with T’challa’s role as both Black Panther and King of Wakanda. However, with the help of his sister Shuri, Nakia, Okoye and her Dora Milaje army, T’challa will (hopefully) make the right decisions. All in all, it is kind of a typical superhero movie. The only and most important difference is that it focused on black superhero-ism. Still don’t know what I’m talking about? Check out the Black Panther Trailer.

Let’s talk about black superhero-ism and representation. First of all, representation is important for many reasons. For example, while watching Black Panther, I felt a sense of belonging and as if it was directly about me. Not only because I am African, but because I was physically represented by Nakia, Okoye, the Queen and princess Shuri. It gave me a sense of what I could be and how I could see myself. And that is why representation matters so much. It does not only shape how others see us, but also how we see ourselves. Most black people already have a basic idea of what other people think of us #ShitHoleCountries #Thuglife #TokenBlackFriend #InsertYourName and so on and so forth. But the most important question is: How do we see ourselves? That is why it is important to create our own narratives and write our own stories #IAmWakanda #WakandaForever.

Of course, there were tweets that implied that even if Black Panther would suck, we would still support it with all we got. However Ryan Coogler came through and that is why it is such a success.

The movie is very diverse and inclusive. For example how a lot of different tribes are represented and projected throughout the movie. You might see glimpses of different cultures and customs that exist all over Africa. I saw Fula, Bantu, Xhosa and many other tribes represented. I think that black people could really (finally) relate to the film and its characters. Overall, you could see that a lot of thought was put into this movie to make it as accurate as possible. I’d say that is why the movie feels so complete. Everything has been thought through so well and it has showcased a whole different side of what black people can do on screen. It also broke glass ceilings for the next Marvel movie.

I love how this movie brought Africa and the African diaspora together with subtle elements. And even though it is fiction, it did reflect a lot of aspects of the real world. Even though, sometimes in reverse. For example, how it was that Wakanda had all the resources, but did not help other black people in the world. All in all, the balance and world power was actually reversed. Other than that, the movie was very funny! I adored Princess Shuri and all her technological gadgets and funny comments.

I loved the whole movie. Period. I loved it within the first five minutes until the very, very end. Hearing Baaba Maal’s music and hearing the djembés and the tam-tams made me think of Senegal. Then, I remembered, I was still in Senegal lol. I loved the role of women and the portrayal of the Dora Milaje. They protect their king and the black panther and serve their country. Also, I was so in awe by Nakia and Okoye. I loved Lupita Nyong’o and Danai Gurira’s performances. They did an amazing job and they are just fantastic women to look up to.

All in all, you can see that there has been so much effort and research put in the movie. The movie was actually really funny!!! I laughed so hard, especially M’Baku and Shuri were so funny that we all burst out laughing.

By the way, there were so many times I actually wanted to pause the movie to get myself together and just you know, breathe. It was too much. If I had feelings, I’d cry. For real. This movie was beyond amazing. It reminds me that we should keep sharing our experiences and stories to change the narratives. Oh and by the way, I have a new greeting. If you know, you know. If not, go see Black Panther in theatres NOW! I am seriously considering going AGAIN! #WAKANDAFOREVER

Want to discuss Black Panther with me? Comment below, or send an email at info@senegalesetwisted.com. Don’t forget to subscribe to my Youtube channel and follow me on IG: @senegalesetwisted and #sntwistedphoto for photography and video’s. Check out my Facebook page @SenegaleseTwisted. See you in my next post. Or NOT!
Comments (2)
Black panther Senegal

2 Replies to “Black Panther in Senegal”