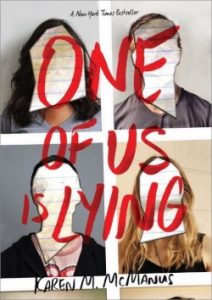 Welcome to another book-review for the Twisted Book Club! You can read the previously discussed book The Silent Wife by A.S.A. Harrison. This time I will review One of Us is Lying written by Karen McManus. It is the first book I’ve read written by her. I read the summary, and was pretty excited to read the book. Also, I was very curious as to what could have possible happened during detention. Of course, I was also curious to why someone would want to kill this student. Are you curious too? Read further or start reading the book! Enjoy this review. 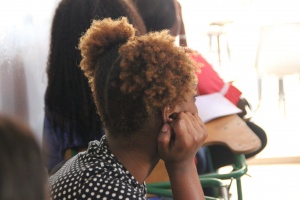 One of Us is Lying

One of Us is Lying is about five students that happen to get detention together. However, only four of them make it out alive. The students are Bronwyn, Addy, Nate, Cooper and Simon. Bronwyn is the smart girl that never breaks a rule. Addy, is the beauty that seems the picture-perfect homecoming princess. Nate has a bad reputation as he is already on probation. Cooper is your typical high school all-star athlete. Last but not least, you have Simon, the outcast who is the creator of their high school’s gossip app. Simon is the one that dies before the end of detention. Of course, the ones that came out of detention alive become suspects. Especially since Simon died on Monday and decided to post juicy gossip about all four of his high-profile classmates the next day. Which basically make them extra suspiscious. Or are they being set up by the real killer? 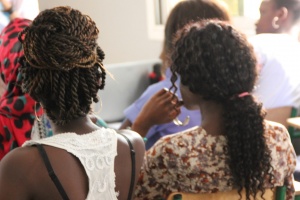 Bronwyn, Addy, Nate and Cooper’s perspectives are the ones presented in One of Us is Lying. The chapters are written very clearly. Whenever perspectives change, you’ll read who’s perspective you’re reading along with the day and time. Normally, a chapter finishes when all four perspectives are presented. However, that may differ in certain chapters. All in all, the perspectives are all easily to follow and not complicated at all. I found it actually refreshing that it changed perspectives often. 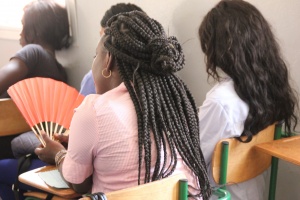 Just like The Husband’s Secret, I think that the essence of One of Us is Lying is that everyone has secrets. Though, One of Us is Lying is more about what it is like to have your ‘secrets’ exposed and being suspected of murder. On top of that, One of Us is Lying is focused more on being in high school and the effect of rumors and social media. We get to see what role the media plays in voicing a narrative and imposing a narrative on society. However, the story is close to reality. Mostly in terms of how social media is being used nowadays, to spread rumors, have businesses, going viral and hashtags, to name a few. 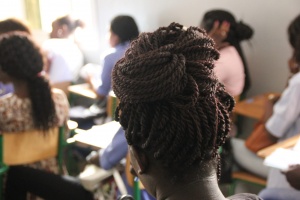 I recommend reading One of Us is Lying. It is easy to follow, the characters are mature and relatable. What is also very beautiful about this book is that they all basically have known of each other, but not actually known each other. If that makes sense. However throughout the story, they all become closer, which is a beautiful thing. They all had presumptions about each other, but eventually they really get to know each other. At the end of the book, everything falls at its place and Karen McManus does a good job of making it whole. Also, I really loved the characters. They were really, well-developed and actually really funny at times. I really did not want this book to end, that is why I cannot wait to read more books written by Karen McManus. 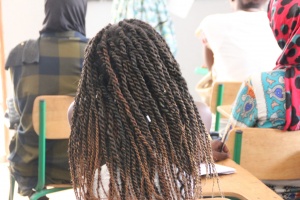 Read One of Us is Lying, share your opninions in the comments, or send me an email at bookclub@senegalesetwisted.com. If you have read a similar book, or want to recommend me a book: send me an email! Don’t forget to subscribe to my Youtube channel and follow me on IG: @senegalesetwisted and @sntwistedphoto for photography and video’s. Check out my Facebook page @SenegaleseTwisted. See you in my next post :).

No comments yet
karen mcmanus