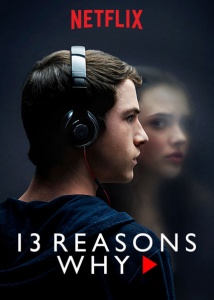 Last year, the first season of 13 Reasons Why came on Netflix. The show on Netflix became a controversial topic, yet, it was very popular worldwide. A while ago, Netflix started streaming the second season of 13 Reasons Why. Of course, I watched that too and I had to get my thoughts together about this show. Mostly, because when season 1 came out last year, there were tons of memes and articles about the show. Some would argue that the show would increase suicides etc. while others would argue that it is a great way to start various conversations about controversial and multifaceted topics. I wanted to take my time and chip into this conversation. So, let’s get into the 13 Reasons Why topic. Trigger warning: mentions of rape, suicide and selfharm.

13 Reasons Why is about a high school student called Hannah Baker that commits suicide. Not only does she commit suicide, she has 13 tapes that each represent someone and a reason as to why she committed suicide. Hannah has confided in someone to get the tapes to the person who is on the first tape. Once that person finishes all 13 tapes, he or she is supposed to pass the tapes along to the person on the next tape and so on and so forth. On each tape a layer of Hannah’s life in high school is uncovered.

In the second season of 13 Reasons Why, the focus is more on the trial. Hannah’s parents, mostly her mom, are suing the school. They want to prove that the school knew that Hannah was being bullied and that the school was responsible for Hanna’s death. One by one, the people from the 13 tapes basically have to testify during the trial. Yet again, with each witness, a new layer of Hannah’s life is uncovered.

One of the main subjects of 13 Reasons Why is bullying. We should all consider that bullying in American high schools is a million times worse than anywhere else in the world. That is something to consider while watching. For Hannah, I think it was too much to be honest. There were too many people hassling Hannah, too many people trying to get with her, but then also not. It was quite annoying. I really felt bad for Hannah, but on the other hand I was like: nah this is exaggerated for this show. And of course, there must be people out there that get bullied far worse than Hannah. But I’d hope they’d be the exception to this bullying rule.

Then there was the sexual assault and multiple rapes. I think that 13 Reasons Why did a good job to shock the viewers. For example, the rapes, and the actual suicide were shocking and very controversial topics. I think it was controversial because it was too real. Let’s talk about Jessica first. She was unconscious, drunk and never consented. Then you have Hannah, not drunk, conscious and also said no. However, she was powerless and could not move. Both of these rapes were too real and relatable, and it is something that probably happens to 2 out of 3 women on a daily basis. Which is outrageous. Yet, we shouldn’t forget Tyler’s story. He was also raped, and it happens to men and boys also. I would say that each case was (very) confrontational, but it was necessary to show us how many ways there are to kill someone.

Last but not least, Hannah’s suicide. A lot of people thought that if depressed suicidal teenagers would see 13 Reasons Why, they would make tapes before killing themselves. I think that is ridiculous. Yes, a lot of people copy what they see on tv and I’d say that is an American thing mostly too. I think that people were not comfortable with seeing Hannah’s suicide, and I get that. But at least these people could fast forward, skip or switch off Netflix and not see it. There are real people out there that want to kill themselves. Do you know how privileged you are if you don’t have these thoughts of killing yourself? I bet they wish they’d want to skip or zap the feelings that overflow them at times.

There is also this way of thinking that it is ridiculous to make tapes and blame other people as to why you killed yourself. Yes, we all get that. However, do not forget that it was a book. Nobody would probably read 13 Reasons Why if the story was told from Hannah’s perspective and she talked about how she was bullied every single damn day by yet another jock or popular girl. Nobody wants to read that kind of story. I think that Jay Asher did a great job of creating a creative way to kind of change the narrative. Even though she already killed herself, Hannah was still telling her own story.

All in all, I think 13 Reasons Why is a good show. I think that we should be way more understanding of one another. Also, the topic of consent and fragile masculinity must be discussed with these horny teenage boys. Women’s bodies do not belong to you, and you cannot expect to take whatever you want. Women are not a commodity. It is actually sad that men and boys still do not understand the idea of consent. That is why #MeToo is so important. How many male celebs (hi Matt Damon) have tweeted disgusting things in the period that all these accusations became public? It shows that consent is still not well-understood by many men. It also shone a light on the roles of women and men, particularly how these are divided in Hollywood.

I definitely recommend watching 13 Reasons Why. Even if not everyone could see that it was a book-turned-into-a-series, therefore its entertaining purposes, people were talking about it. Lot’s of people world wide, actually. The awareness that was created for these different topics is very important, and should not be forgotten. I actually think that awareness and conversation is the most important thing we got out of 13 Reason’s Why. There must be so many people that you know, in your family or among your friends that must have thought about killing themselves. And if you are someone that thinks of ending your life, please know that you are worthy. You deserve to live, and that there is help out there! You can go to www.13reasonswhy.info or download the app Calm Harm if you are thinking of self-harming.

Have you seen 13 Reasons Why? Let me know what you think about the show’s different topics mentioned or send me an email at info@senegalesetwisted.com. See you in my next post!