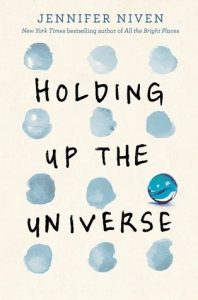 Holding Up the Universe written by Jennifer Niven. Holding Up the Universe, is written from two perspectives. On one hand, you have Jack Masselin and on the other hand you have Libby Strout. They are both 16-year olds in Highschool somehwere in America. They have their own struggles and the story pertains mostly to how these two teens navigate through their own personal problems and their life in HS. For example, Libby was once named America’s Fattest Teen and has always been homeschooled, until now. Jack on the other hand is a very popular boy, but he has prosopagnosia, meaning that he cannot remember faces, not even those of his family members. Want to know my opinion? Keep on reading 🙂 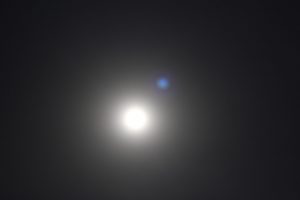 Holding Up the Universe

What I absolutely LOVED about the book was that Libby was not depicted as this insecure and awkward being. I’d say that Libby was very confident and sassy, yet she was not only that. She was human, and it was just too perfect. Normally, in storytelling when someone is depicted as the outcast, they are like too stereotypical, in this case, Libby was truly an exception. Not only did Libby struggle with changing from homeschool to public highschool, she also had to confront her personal issues with her weight and with the loss of her mother at a young age. 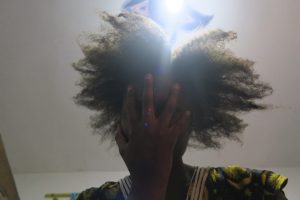 Jack on the other hand, is dealing with prosopagnosia and cannot remember faces. Instead, he has to identify people by other characteristics, called identifiers, like their hairstyle, hands, ears etc. He cannot even remember the faces of his own family members, and on top of that, nobody knows he has prosopagnosia. Because things are not going on so well at home, Jack feels that if he’d tell his family, he’d add to the problems and their worry. Which is something that happens a lot during our lives. Why is it that people always think they can calculate the consequences of sharing things with others? And why do we always expect the worse? 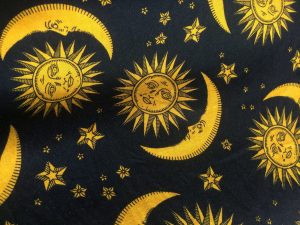 I think that the essence of Holding Up the Universe is that everyone has something they deal with, especially during Highschool. The most popular people have their own fair share of problems and insecurities to deal with, and even the girl that used to be America’s Fattest Teen has gone through something that you can relate to. I’d say that the emphasis lies on what happens on the surface and not necessarily what is obvious.

I really loved reading this book, I chuckled quite a few times too.  Holding up the Universe was very refreshing, not predictable nor was it stereotypical. What I loved most, was that Libby was quite a sassy and confident girl. So, there are no stereotypes around bigger girls that are insecure or afraid to speak up. The same goes for Jack. Even though he was popular and depicted as cool, he was not stereotypical at all. Also, together, Jack and Libby were so funny. Their friendship was so natural and really nice to read. I think that if you’ve read All the Bright Places, I think you’d like this one too. You can read my view of All the Bright Places. 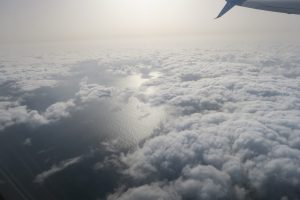 I definitely recommend Holding Up the Universe as it was easy to read. Additionally, the book was well-written, fun and I have to say that Jack and Libby are relatable. At first, I was skeptical about reading it. Mostly, because I thought it would be too similar to All the Bright Places. However, I actually do not think it is comparable in terms of the story and characters. I had much more fun reading Holding Up the Universe. I’m sure that if you liked All the Bright Places, you’ll like this one too. Overall, I am happy to have read both books book. I am curious to see what other books Jennifer Niven comes up with :).

Thank you for reading this review and don’t hesitate to share! Feel free to talk to me if you have any questions or opninions about Holding Up the Universe in the comments, or send me an email at bookclub@senegalesetwisted.com. If you know a good book for me, I am always eager to add books on my to-read list :). Don’t forget to subscribe to my Youtube channel and follow me on IG: @senegalesetwisted and @sntwistedphoto for photography and video’s and check out my Facebook page @SenegaleseTwisted. See you in my next post :).

No comments yet
jennifer niven