For the first time, I went to îles de la Madeleine. I have always seen the beautiful pictures, but I have never actually visited. When Fadieye invited me to join her to the islands, I did not hesitate! It was actually after #ELITE2018 that we decided to go to îles de la Madeleine to relax. We did not stay all day, but we definitely made it worth our while. Today, it will be different! Let’s get into this beautiful, historic island 🙂

Île de Madeleine is a small island group near Dakar. The islands are uninhabited, and it is the smallest national park in the world. However, îles de la Madeleine has the chance to become one of UNESCO’s world heritage sites. The main island is île de Sarpan, which derives from the Frech word for snake; serpent.

To get to îles de la Madeleine, you have to buy tickets for its national park which includes the boat fare. Then, you will take a small boat from there to the main island. What I didn’t know, was that it was possible to visit different parts of the island.  For example, there is a turtle beach, a seal bay and many different spots to watch birds. Additionally, you can swim, there is a sacred Baobab and there are the ruins of Case Lacombe. 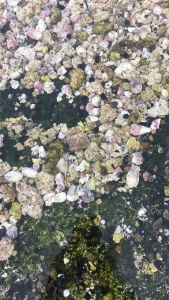 We went to îles de la Madeleine quite late in the afternoon. I think that because of that, we did not get the opportunity to visit other parts of the island. However, we did have enough time to roam through the water a little bit, we saw some interesting birds, and just had fun! Let me tell you one thing though, the water was COLD!! I really wanted to swim actually, but just wading through the water was enough. The water was SUPER COLD. No jokes. Other than that, we did see some shells, and fun fact: if you are in the boat going to the island or back to the main land, you can actually see jellyfish!

If you have any questions about the islands of Madeleine, you can send an email to info@senegalesetwisted.com. You can watch the les îles de la Madeleine video now. Thank you for reading and check out the video on Youtube!