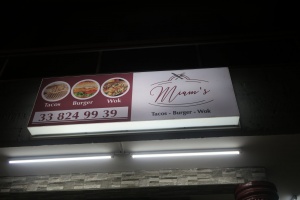 Last time, I took you out lunching at Resaurant Le Ngor. Today, however, we are eating FASTFOOD again! Haha, this time we will be eating at Miam’s Restaurant located at Liberté II. This is the first time I went eating at Miam’s. I went here with Youma to get some dinner. We were actually roaming around in her neighborhood when we spotted the restaurant. We decided to take a look and eventually ended up eating some fastfood there. Let’s get into Miam’s! 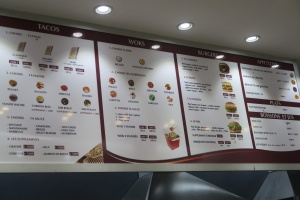 Miam’s is located in Liberte II, near the Stade Demba Diop. I have to say that most fastfood restaurants in Senegal more or less offer the same things. Of course, there will be small differences, but it all depends on your taste. For example, I prefer Kabylie’s hamburgers over the ones at La Brioche Dorée. Yet, the burgers are not that differently. Kabylie puts more cheese in theirs and I love it that way. What I loved about Miam’s was that they had the standard Senegalese fastfood dishes. You can think of panini’s, hamburgers, fataya and shoarma. However, they also had taco’s and wok! Which is super cool, and you don’t see that often here. Unfortunately, I stayed within my comfortzone and was too hungry to change it up. However, I might come back to taste their wok or taco’s! 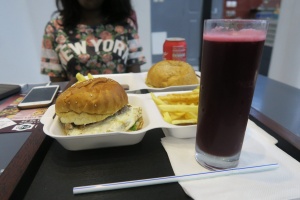 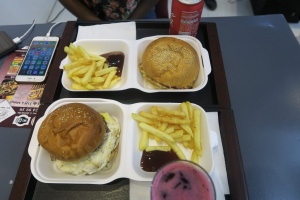 When Youma and I went to Miam’s, we were literally the only people there. The restaurant is well-located. Everyone that walks by, will notice the restaurant. The staff was very friendly, but we were the only customers, so who knows if it is packed?! All in all, it was nice to eat our fastfood in peace. Of course, Youma and I went for the same thing! We got a hamburger with fries on the side and bissap as our go-to drink. 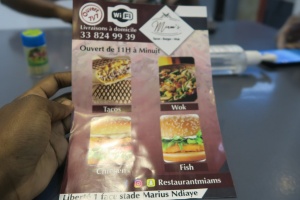 I liked eating at Miam’s. Definitely because of its calmness. I definitely recommend eating here, if you like Senegalese fastfood that is. I understand if people don’t like it, because I was also skeptical at first. Why would someone put an egg on a hamburger? However, I just tried it and I thought it was ok. Later, I grew to basically love it and now, I really do lol.

Can’t wait to share my next meal with you! Keep in touch 🙂