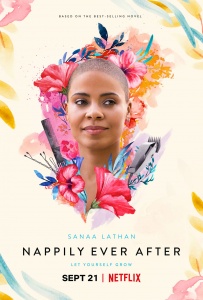 Today, I am reviewing the long awaited Nappily Ever After. As you know, I have been watching quite some movies on Netflix lately. Last time, I reviewed Dangal, an Indian movie about two girls realizing their fathers dream. Very touching. Nappily Ever After, however, is a whole different story. First of all, it is based on a novel by Trisha R. Thomas. Nappily Ever After is about a woman trying to find herself while redefinig what beauty is. In short: a black woman whose hair has always looked flawless, is shaving it all off. Of course, all the naturals wanted to know how this would end, so did I. Let’s get into Nappily Ever After!

Nappily Ever After is about Violet Johnson (Sanaa Lathan) whose hair has always looked perfect. Overall, Violet has always looked great. She is the definition of what women should be: successful, beautiful and independent. Also, she has everything: beautiful hair, a house and a sexy doctor boyfriend (Ricky Whittle). However, when she gets a dog instead of an engagement ring, Violet goes on a whim and dives into a journey of self-discovery. With no hair, she gets to redefine herself. She meets a male hairdresser, Will, and his daughter, Zoe, who is such a cutie pie btw! Violet struggles with being what people expect of her, and what she truly wants. Which, I think, every one can relate to.

I think that when it comes to black women and their hair, it can be complicated. Self-hate has so many facets and dimensions, that it can be very confusing. A lot of women struggle between, being themselves, being professionally acceptable and being able to manage their hair. This means something different for every woman out there. On top of that, black women are conditioned to change their hair in order to fit in other people’s bauty standard. Like in the movie, Violet is strongly influenced by how her mother viewed black hair. By the way, why does Lynn Whitfield always play a toxic black mom? I’m actually so tired of her, and I still can’t forgive her for what she did in Madea’s Family Reunion (lol). All in all, Nappily Ever After depicted a relatable story and I think that is important.

Also, Nappily Ever After really showed how important it is for women (and men) to give great examples to (their) children. A lot of times you hear about black women not straightening their hair because they want to set a good example for their daughters. I never really thought about it, because it sounds logic. What I found funny is that Violet tells Zoe that she is beautiful and shouldn’t let anyone tell her otherwise. While Violet is not even close to following her own advice. Which comes back to how we as people are always so quick to give other people basic advice. However, we are often unable to see what we are doing wrong, or follow our own advice.

I really enjoyed watching Nappily Ever After, more so because of the representation and the topic of the movie. Also, I think it is important to say that the movie was not corny and Violet did not necessarily end up with a love interest. I think that some aspects and perspectives surrounding black women and black hair were accurate and most importantly: relatable. My hair has always been natural while my mom and sisters used to have relaxers. Not because of self-hate, but more because they were used to it. So, no, Violet’s story is not my story, however it is still relatable. I always change hairstyles, from braids and twists to wigs and weaves. The underlying thought should be if you are doing it for yourself or for others?! Maybe, we should all shave our heads and find out??! Lol.

If you haven’t seen Nappily Ever After yet, you should! If you have, let me know what you think about the movie. Would you wear your natural hair to set a good example for your kids, even though you don’t like it? And what about shaving off all your hair completely?

Don’t forget to keep in touch!

No comments yet
netflix