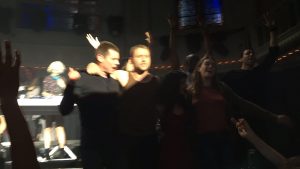 Last summer, I had the 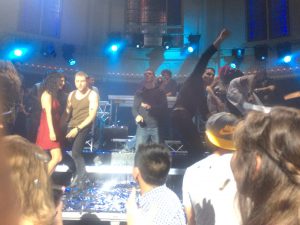 opportunity to be on the set of Sense8 in Amsterdam! In this post, I want to share with you how cool it was. You can imagine how different this post will be compared to my last one where I took you with me on the Hong Island Tour in Thailand. Please, keep on reading if you want to know how it was to be on set with the sense8 cast!

midnight. Before I signed up for Sense8, I got a few emails where they asked for extra’s on set, and I was not able to go the other dates.. So, when there was finally a shoot day where I was available, I signed up (obviously)! 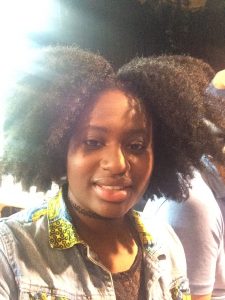 On the shoot day, we had to be in Paradiso in Amsterdam, so I knew it was going to be a PARTY!! I have to say that it took a while before we actually started.. Since it was not my first time on set, I knew that it is normal to have to wait until everything is set up and before you actually start filming. At one hand, I hate it. Because I think the extra’s are the ones that will always show up no matter what. Not that I consider myself a diehard extra. However, I have met some diehard extra’s on set and I have to say they are pretty diehard. Anyway, there was enough food and there were enough people to talk with and kind of network with to see which casting agencies they are signed with and what kind of jobs they did. Which I always find refreshing, because you always get to hear new things and you can share some insights etc.

Mind you that I tried watching Sense8 long before I went on set. However, I could not poke through it. That woman Angelica, was so damn annoying to me and I did not understand anything of the people and what was happening. Of course, after being on set with the cast and seeing the some interesting scenes/shots, I really became curious about it and wanted to see the show. That is why I binge-watched Sense8 shortly after. I have to say that eventually it was pretty easy to understand. I even hated the fact that I had to wait so long until season two finally came on Netflix. Y’all, I was so happy to watch the Christmas Special on Netflix! For real.

The funny thing about being on set in Paradiso was that an actual party started around 23h. Meaning that there were people that paid to enter, and there were people who were paid to be there (including me)! Filming was quite interesting. The people who watch Sense8 know how it is set up it the real characters and their sensates. Which is what got me so curious about the show, that I started watching it. All we had to do was scream and dance, either to music or to silence lol. Overall, due to the storyline of Sense8, I think it was a pretty cool and fun experience, on top of that it was an American Production! Please watch the video’s to get a glimpse of how LIT the party was :). Enjoy!

I hope you enjoyed reading my experience on being on the set of Sense8 in Paradiso. Sense8’s second season premieres on May 5th on Netflix (yesterday)! Whoop whoop, meaning it is available RIGHT NOW! Go watch it, I recommend the show because it is different, relatable AND funny! If you are not sure, please check out the trailer on Youtube! And while you are on Youtube, do not forget to subscribe to my channel! Video’s coming soon 🙂