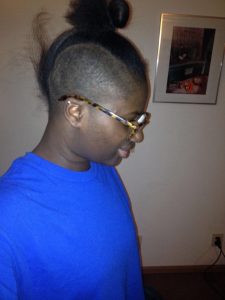 It has been a while since I talked about my hair! As some of you know, I had a double side cut in January of 2015. Which is almost 3 years ago!! I actually loved wearing my hair in a double side cut. It is just such a waste I never talked about it. That is why I’d like to share with you the different styles I have worn when I had my double side cut. Also I want to share how I’ve dealt with growing out just one side, and eventually growing out the other side too. It is now almost three years later, and my hair is basically fully recovered. 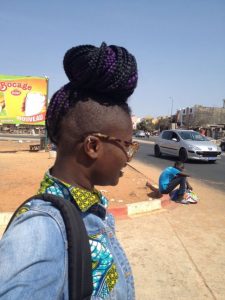 I remember shaving off the sides of my hair a few days before going to Senegal at the end of January 2015. I was tired of braiding my whole head, and decided that I wanted to shave off both sides. Therefore, after a lot of thinking and comparing pictures, I decided to do it. With the help of my sister and mom, I did it! 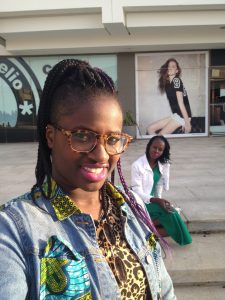 After shaving off the sides, I put in box braids. Meaning that I only had to braid the middle of my hair, and I was done so fast! I loved it. Which was basically the point of getting a double side cut.   In Senegal, I either wore my braids tied up in a pigtail, or I put a high bun on the top of my head, mostly for shock value.

When I came back from Senegal, mid-february, I was preparing to go to Berlin for my Exchange period, starting in March. I basically wore my hair in box braids during my exchange too. It was in Berlin that I decided to grow out one side of my hair and shave the other. 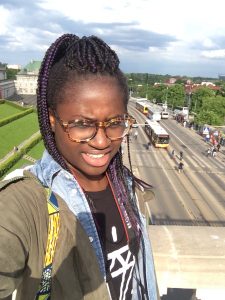 When I came back from my internship in January 2016, I decided to wear wigs for a while. I was probably giving my hair some rest from the braids I had gotten in Senegal. The wig I wore, was the first I had ever made. I colored and styled it myself too.

After a while I decided to dye my hair black again. This was mostly, because I really found it hard to blend my reddish hair, with other colors of braiding hair. Therefore, I went back to black which allowed me to mix other colors better with my natural hair. 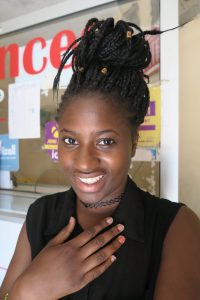 In August 2016, I went back to Senegal and wore my hair mostly in braids. That is when I decided to actually grow out the other side cut too. In three months, I let my hair grow out. I mostly wore my hair in protectiv styles, like crochet braids and box braids. At the end of my trip, I decided to get some grey box braids. As you can see on the picture below. Which are the same box braids I had when I went on my #BLCKGRLinAsia trip!

Next, I will share with you the different ways I wear my hair here in Senegal. I really want to start sharing my hair journey with you guys. I actually always take pictures, but never write about it. Therefore I will try to write more about the way I wear my hair and share my documentation with you.