I hope everyone is doing fine! As you can read from the article, have an announcement to make: I AM IN SENEGAL! YAY. Lol, I am kind of happy.. Mostly because, normally, I’d be going to school instead. And while all my classmates and friends are actually in school, I will be chilling in the sun!

I have been really busy with school, and arranging things for my exchange in Berlin! I hope you guys don’t mind, because I will still try to post as much as I can :).

To give you guys a sneak peak or #throwback to Senegal, I will post a few pics I have made throughout the past years when I visited. If any of you have any questions, suggestions or just want to get in touch.. send me an email :). 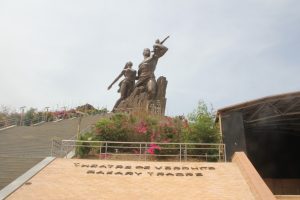 This is the Statue of the African Renaissance. Built in 2010 by President Abdoulaye Wade, who made it a symbol for the Unification of Africans in Africa and the African Diaspora. I really love the monument, and have visited it several times.

These are a few shots from the village my grandmother lives, Podor. Most northern village in Senegal. Across the river, is Mauritania :). The first pic is just a few boys that came around the house for ice. One of my uncles sells ice and they were waiting for him. The other pic is just a group of men sitting under a tree because outside the shadow it was too hot. They were drinking tea, and talking lol.

This pic is just to show you guys the nice juice’s they sell. I really love drinking Gazelle Ananas or Vimto! Hahaha, if you guys want to see more of this. Let me know.