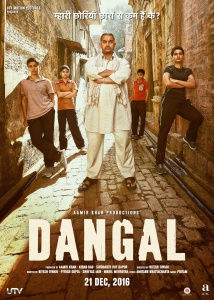 Dangal is an Indian movie about Mahavir Singh Phogat who was once a promising wrestler. His dream was to win that golden medal for his country India during International competitions. However, Mr Phogat never got that golden medal. So, he is forever hoping that he will one day get a son who will fulfull his longtime dream. Hoewever, it happens to be that he and his wife get 4 daughters and no sons (lol). When one day, both his daughters Geeta (14) and Babita (12) beat up two boys who teased them, Mahavirs dreams are resurrected. He tells his wife that he wanted gold medals, and it really didn’t matter if it was won by his sons or daughters. And so the adventure begins for a father and his two daughters.

I think that the movie had a great focus on feminism and representation. The feminism in the movie goes beyond your standard movie with heroines. Geeta & Babita are regular Indian girls who get trained by their father to wrestle. Their father, never even thought about training his girls for wrestling. However, when the opportunity presented itself, he never ever thought they couldn’t do it due to being girls. He even convinced many other men that they could do it. Never did he exaggerate, nor did he force his feminist views on others. He just let them wrestle and prove themselves. That is how he at the end, had two daughters who had paved the way for other girls. And also why it was so important for them to win, not for the medal or the country, but to be an example for other girls.

I really liked Dangal, I became more and more excited throughout the movie. I really wanted to know if Geeta and Babita would make it as wrestlers and also if they’d eventually actually grow to like it. Sometimes I thought that it was somewhat toxic or abusive to make your children live out your dreams. I mean, you should have lived it yourself and have them live out their own dreams. But that is only my own privilege talking. I have the opportunity to live my own dreams and walk my own path. However, Geeta & Babita did not. They would have probably married young and do housework for the rest of their lives. So, you choose.

There are enough people who live their parents’ lives instead of their own. Is it really bad for daughters to live their fathers dream? I don’t think so. Mahavir was so dedicated to wrestling and his daughters. He and his nephew supported them throughout the whole journey. Mahavir made deals in order to provide the right nutrition for his daughters. He made sure that even when they were denied access to train with the boys, that they had a space to train. He was always there for them and trained them so well. Even when they both got to Olympic School, he was there to support them. I mean I think that some parents may not literally tell you they love you but it’s these things that let you know they really do.

You should definitely check out Dangal on Netflix. If you do, let me know what you liked about the movie. Would you have your children live the dream you couldn’t? And vice versa: would you want to live out your parents’ dreams?

No comments yet
Dangal netflix