Last month, I went to see Black Panther in the 37cinq cinema here in Dakar. It is my first time visiting a cinema while in Senegal. Well, I went to the cinema in Magic Land in 2015, however that was just a visit and not to watch a movie.  Anyway, I did not expect to have been able to see Black Panther here in Senegal that soon. Therefore, I was beyond excited that there is not one cinema, but there are TWO! Let’s get into 37cinq!

37cinq is located at Sea Plaza. I understand that the cinema used to be on the roof of Sea Plaza. However, they moved it just on the Place du Souvenir at the other side of Sea Plaza. Therefore, you’ll pass by the cinema first if you come from the direction of La Corniche. Other than that, it is not hard to find the cinema. Although, when you look at the building, you might not expect it to be a cinema. Neither are their indications to the fact that it is a cinema. 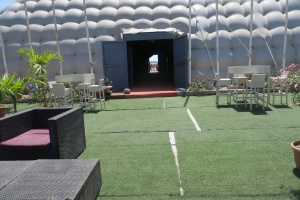 It has been a quite while since I went to the movies. The last time, I went to see The Hitman’s Bodyguard with Ryan Reynolds and Samuel L. Jackson. Whom I actually saw during the shooting of scenes in Amsterdam, which you can read about in my 2017 Update. Anyway, I came 30 minutes before the movie started to get my ticket, as instructed. I was one of the first people to buy a ticket and soon after the people started coming. The movie was supposed to start at 18:30 but everybody knows that the movie never starts on time. We only had to wait about 15 minutes before the movie started, and I wanted to sit in the middle but a bit in the back. However, the chairs were a bit wonky, so I just got myself a front row seat in the middle. The movie started immediately. There were no ads and no trailers.

Seeing Black Panther on the 16th was already exciting. Therefore, nothing else could disappoint. However, looking back on the experience, there are some points of improvement. For example, there were no props! That was quite disappointing, because I thought I could take pictures with posters. Or even have cardboard cut-outs that they could give me when the movie would stop screening for example lol. I’m not sure if you have noticed, but in my Black Panther post, I did not include any pictures. This was mostly because, there were no props, therefore, I used GIFs. Which was actually better.

Thank you for reading! If you want to share your stories on visiting Africa or Senegal, please email me! This also goes for questions or suggestions: info@senegalesetwisted.com. Don’t forget to subscribe on Youtube and follow me on IG: @senegalesetwisted and @sntwistedphoto for photography and video’s. Check out my Facebook page @SenegaleseTwisted. See you in my next post!